Should I take the Writing portion of the ACT?

In short, the answer is yes. The idea of adding another 40 minutes to an already lengthy test isn’t ideal, but we have a few reasons why you should always take the Writing portion of the ACT.

Let’s go over what the Writing portion covers. The Writing prompt provides you with some options, or perspectives on a question. The task is to analyze the perspectives and provide your own point of view based on the three presented to you. The prompts are geared more towards broader social issues, such as taxing or not taxing unhealthy foods, or the usage of intelligent machines replacing a human’s job or not. 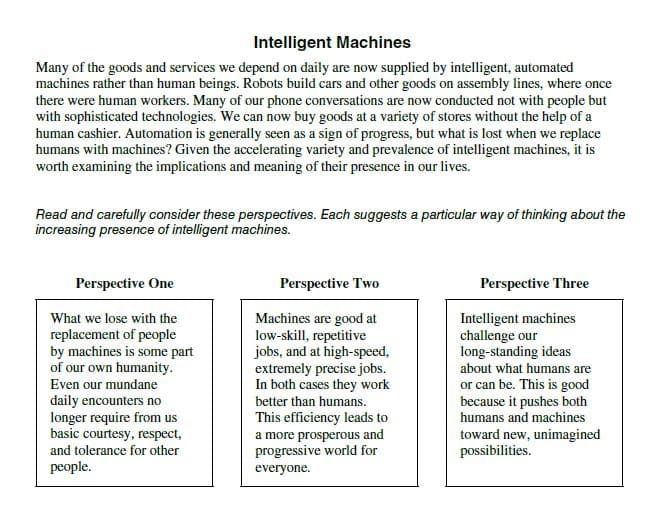 The Writing portion is 40 minutes long, giving you time to read, analyze, and incorporate the perspectives into your essay plan. This portion is based out of 12 points that is not rolled into your overall composite score.

Many colleges and universities require this section of the ACT. This section is optional, but a student can’t go back and only take the Writing portion of the test, they would have to retake the entire test and include this portion as well. So, an extra 40 minutes tacked on to the end of the test is much more appealing than retaking the entire test! Take a look at your college list and see if they require this section or not.

Every essay is unique. Everyone has a different point of view and a different take on the essay. Voice your opinion! Keep in mind, you will still need to develop a position, include appropriate examples, organize points, and manage your time carefully. Make sure to indent your paragraphs, keep your writing neat, and minimize your spelling and grammatical errors.

It’s just another essay. Don’t work yourself up too much about it. Think through a strategy to prepare for test day. You’ll want to incorporate some specific perspectives and analyze the quality of the argument. When you are prepared and ready, you will most likely feel more confident and that will reflect in your essay.

If you simply don’t feel prepared and ready to take this section of the ACT, we can help. Our Standard and Advanced Courses as well as Private Tutoring cover the Writing Portion of the test. Our tutors are invested in each student and want you to get the score you need for the school you want.

When is the best time to take the ACT? That depends. What do you have going on? The answer is going to be different for everyone. However, we are going to break down every ACT test date to see which one best suits students’ schedules.

Honestly, most of our tutors at Get Smarter Prep like the July test date best. Test prep generally begins towards the end of May, which means school is out.  Students don’t have to worry about finals, graduation parties for their friends, or the chaos that comes with the end of the school year. However, if your family tends to vacation before the middle of July, then we have problem. It’s best to take a look at your schedule and plan accordingly. If you don’t take a vacation or plan for a holiday later in the summer, then the July ACT is a great fit!

Maybe you’re traveling all summer and the June or July ACT isn’t a fit for you. Now we are getting into the September ACT, which begins test prep at the end of July. The next available test date is October. This test date is great for several reasons.  Students are already back into the swing of school, which means they are getting used to a schedule and back to studying.  Adding on test prep for the ACT would be like adding in extra class. However, depending on which sports and extra-curricular activities students are involved in could be too much for a number of students. Keep in mind, our courses are 8-10 weeks long. Private tutoring is anywhere between 3-15 hours depending on the students’ goals and availability.

What about the December test? Another great option for students who want to complete the ACT before finals begin. Also, it’s cold outside. What else is there to do? Plus, students can go into Winter Break knowing they’ve completed the ACT. It’s a win win situation.

If not the December test, then perhaps the February ACT? Prep for the February test generally begins at the end of December. Why not get a jump start on studying while still on Winter Break? This test date is a great test for Juniors to take! By this point in your high school career you’ve most likely taken Algebra, Geometry, Biology, and Chemistry, which is the bulk of the Math section. Plus, there is still time to prep and take an additional test if need be.

April showers bring May flowers…so they say. But, it’s a test date worth looking into. Test prep for the April test begins at the end of February. If you want to be completely finished with ACT test prep before thinking about finals, then this is the test date for you! Also, if you take the test in April and do well, then you don’t have to think about it while on summer vacation or while completing college applications.

June promises summer and test prep? At least at the beginning of June. The June ACT is great for students who don’t mind doubling down on finals as well as ACT prep. Test prep begins mid-April right up to the week leading up to the test.  Students will have about 2-3 weeks after school is out to prep for the June test.  If students can manage finals with the promise of summer vacation surrounding this test date, then it’s a date worth considering.