1. I am an identical twin. My twin sister boasts that she’ll be able to get away with any crime she may commit… “They won’t be able to prove ‘beyond a shadow of a doubt’,” she says. I tell her I would be the one with character witnesses. She also tells me she’d have to “think about it” in the event I need a kidney. “I only have two!” she says. Hence the bit about the character witnesses.

2. There are two things I love: delicious coffee and correct grammar. If there was something that combined these two, I’d quite possibly lose my mind.

3. I’m a self-proclaimed, well-rounded, “cool” nerd. My favorite TV series is Doctor Who.

4. I took 5 years of Spanish in school. I would struggle to speak it today, but can understand when people are pointing out the fact that I have a twin: “¡Gemelas!”

5. I am tied for youngest of eight siblings: seven girls, one boy. My twin and I were born at home on Christmas Eve. It was planned to happen that way, up until the point my parents realized there was another baby on its way out. Surprise!

6. I love a good book, album, movie, or television series. I am not the kind of person that can only experience something once. If it’s good, I’ll watch, read, or listen to it anytime, again and again.

7. When I was two, I allegedly stuck a candy corn up my nose on the one family vacation we ever went on. By the time we arrived at the ER, it had melted in the heat of the day. Since I cannot recall these supposed events, I maintain my innocence. My siblings still act as if candy corn are nuclear missiles anytime we have them around, making sure I don’t make the same mistake twice.

9. I have the sort of brain that is good at remembering… everything. This makes me very good at trivia-type games, quoting movies/lyrics, and being a witness to events, while simultaneously creeping people out. eg. I can identify which person walked down a hallway before me just by identifying their scent. Naturally, I keep a lot of things to myself.

10. I am an introvert. I love sitting and observing. People watching is one of my favorite pastimes.

Angela Milton is a Proctor at Get Smarter Prep. 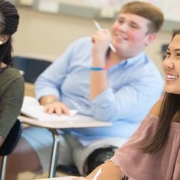 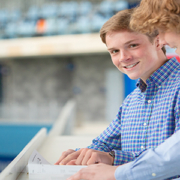 A Short History of Get Smarter Prep
0 replies

A Short History of Get Smarter Prep