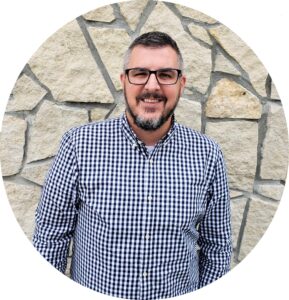 Caleb Pierce grew up in Denver, CO, where he attended John F. Kennedy High School (Go Commanders!). While in high school, he was a captain of the Varsity Baseball and Football teams, Senior Class President, played trumpet in jazz band, and involved in any and all activities his schedule would allow.

Leaving the comfort of home for college at MidAmerica Nazarene University in Olathe, KS – he sought to continue with both football and baseball, while pursuing his degree in Chemistry. Caleb loved his college experience, working both in the admissions department and as an Resident Assistant for three years. After graduation, he moved to Quincy, MA (home of John Adams, John Quincy Adams, John Hancock, and, of course Dunkin Donuts) where he worked at a small, liberal arts college and began his Master’s. In 2007, he returned to Kansas City to work at his alma mater, and he earned a Master’s in Enrollment Management shortly after joining the GSP team. Caleb has been married since 2006 and his wife, Molly, is a mental health therapist in Leawood, KS.

Caleb is available to work with students at our Leawood Office Mondays through Thursdays from 10AM-6:30PM, Fridays from 10AM-5PM.