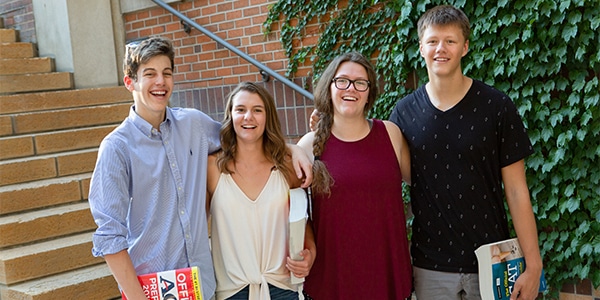 Unlike in most high schools, finals in college are spread out across a week’s time, with each class getting assigned a particular day and time. This doesn’t mean that you won’t have two finals on one day, but it does mean that you’ll have significantly more time to study between tests than you did in high school. Sometimes students grow complacent and assume that they’ll have plenty of time to study for each class, but unfortunately, final exams in college tend to be comprehensive (ie. over everything you’ve learned that semester). Unless you’re awesome at last minute studying (many of my students think they are but their scores say otherwise), I suggest preparing your study schedule weeks in advance.

When I was in school, it seemed like all the final paper due dates and final exams happened at the same time. It seems like this is still the case as I watch my students start to glaze over and stop doing their homework right before finals weeks.

I suggest that, with your syllabi in hand, you sit down in mid-April with your calendar and figure out a game plan that keeps you on track to finish everything. Maybe you’re going to write a page a night to get that Econ paper finished by mid-May. Maybe you’re going to review anthropology lectures for 15 minutes after dinner to prepare for the final.

Planning makes sure that your future self, who could potentially be working into the wee hours of the night for a week straight (during what tends to be some of the most beautiful weather of the semester), is not going to curse your lazy, Game of Thrones-watching past self.